THE ART OF COMMUNICATION

There is one things that has always made Fratelli Branca stand out, both as a company and as a family: creativity. A great example are the advertising manifestos of the last century, but also the press and TV campaigns planned currently. Because being authentic and elegant is one thing, but being authentic and elegant creatively is another. Here are some examples:Here are some examples

In the Fratelli Branca archive the first advertisement dates back to February 14th, 1865. It was advertising on La Perseveranza, a daily paper printed in Milan between 1859 and 1922.

The print ad was, so to say, “in its beginnings”: a print of more or less 10x10cm with an abbreviation of the name of the product, together with some curious content. “Il Fernet”, as it was defined back then, would then be known throughout history as “Fernet-Branca”. It was introduced as a liquor with beneficial properties, particularly useful to cure fevers and anxious states.

As years went on, the advertisements became always more important.
In 1876, in fact, with the first edition of the Corriere della Sera, the presence of Fratelli Branca covers also daily newspapers.
The beneficial properties of the product gain more and more importance: testimonials of several hospital and medical centers are published, together with seals of approval. Among them, of particular importance, was the Fatebenefratelli hospital in Milan. Thanks to the testimonials of the hospital director, Padre Nappi, the product gained further success and affirmation. 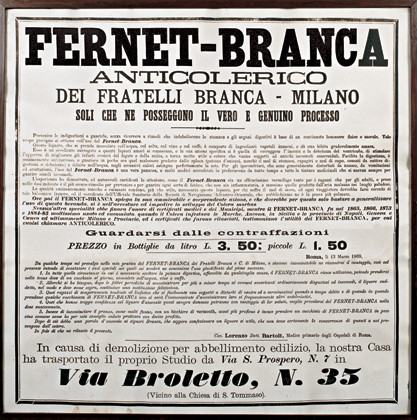 The author of the aquarelles is Rodoldo Paoletti, born in Venice in 1866, partner with Fratelli Branca of the typographic studio F.lli Tensi and author of elegant magazine covers in in “Secolo XX”. The designs, which represent men and women of various countries, were most likely destined to a series of figurines in Liebig collection style, at the time considered to be very fashionable.

Since the first years after WWI, Fratelli Branca started a communication strategy so as to give it a high profile image: the realization of posters was given to great Italian and French illustrators; manifestos and “campaigns” ewre brought to light by the best agencies of their time (Les Affiches Maga di Bologna, Acme-Dal Monte di Luigi Dal Monte e Agenzia
III di Umberto Notari). 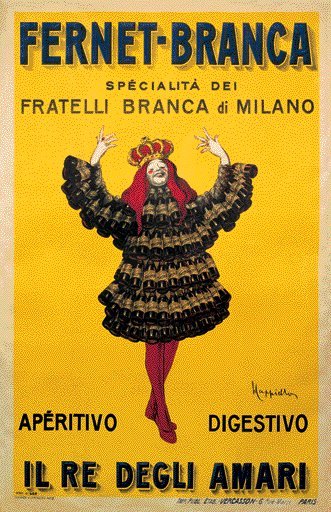 The years succeeding WWII are, for Fratelli Branca, decisive, to say the least. The production facilities were re-built after the bombbings of 1943, and campaigns were planned on two new important medias destined to change history: radio and TV.

The first ad transmitted through evening Carousels (a space on Italian TV dedicated to to “storytelling ads” is characterized by modeling clay and a jingle that not only enchant critics and advertising experts, but also the general public. 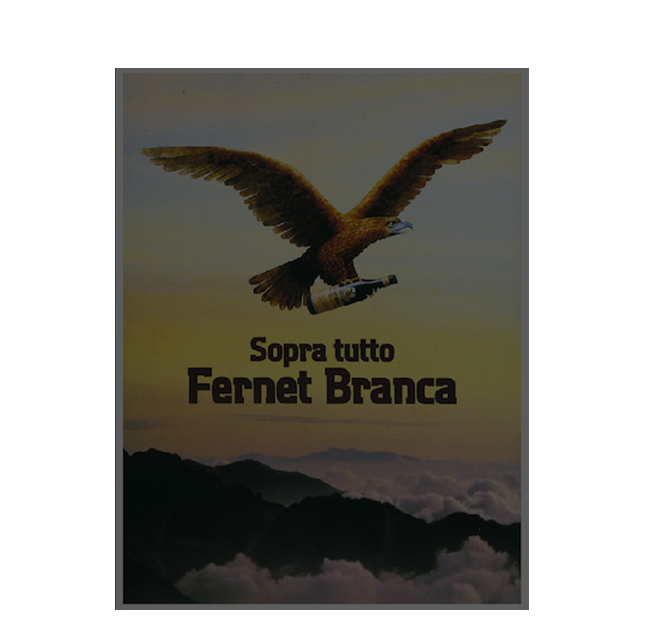 Branca created a photographic archive with all the advertising signs that were installed in bars and restaurants back then. The photographs, shot between 1890 and 1960 are a unique source in their own genre: they give as an extraordinary documentation about buildings, stores and decorations in public bars. The collection, together with other advertising materials, was the main concept of an exhibition installed in November 1981 in the rooms of the The Scala, of which Bernardino Branca in 1913 was a contributor. 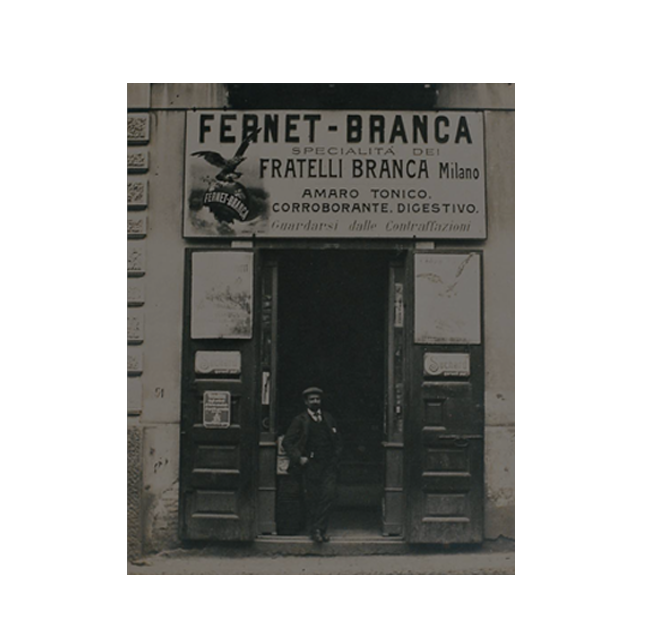 In the second to last decade of the 800s, the age which was renamed the golden age of manifestos came to be. The trend started in France, where chromolithography permitted to print manifestos in large scale formats.

Fratelli Branca don’t miss the chance to use this new technique in their own communication: beginning in 1886 a series of calendars was produced for the Italian and International markets with female as the prominent subjects. 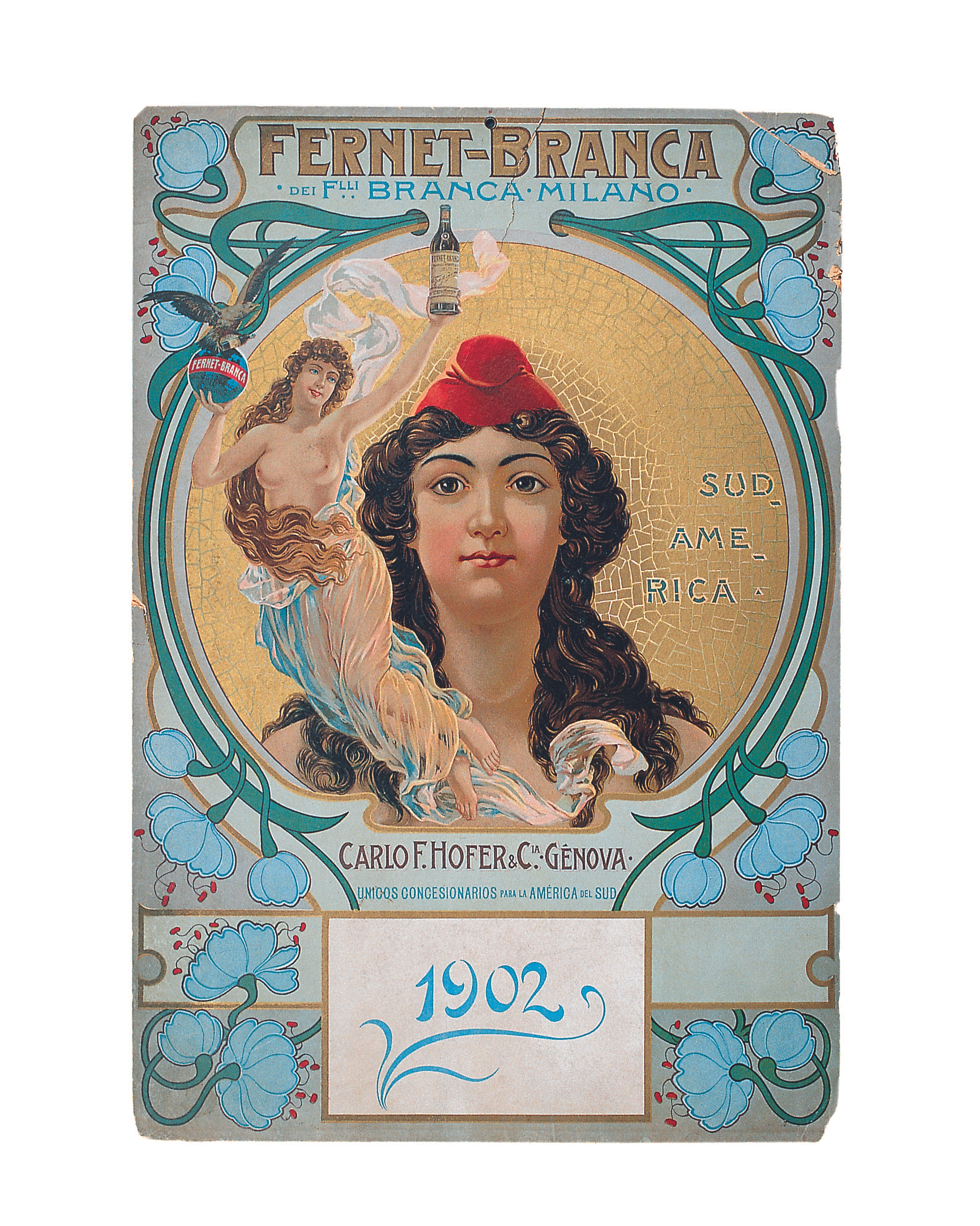 The eagle that holds the Fernet-Brand in its beak while it flies across the world appears for the first time inside the Branca calendars in 1895.
After using the image for a couplel years, in November 27th 1905 the logo was officially registered at the Ministry of National Economy.
The brand, which throughout the years became the symbol of the company has important roots: the author is Leopoldo Metlicovitz, born in Trieste in 1898 and was one of the most representative artists of the period. He was a point of reference for many young talents, including Marcello Dudovich. 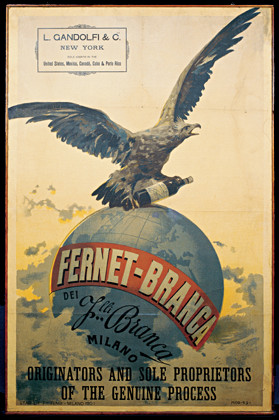 Designed by Giò Ponti, the Branca Tower is considered a true work of art. Slim and transparent, and true architectural challenge, it was built in record timing, in only 2 months and a half in 1933, on the occasion of the 5th Triennial exhibition.
Also built were 6 big isolated temporary arches, ideated by Sironi: Milan had acquired the exclusive on the European international triennial exposision on decorative and industrial arts.

The tower became inaccessible and went “out of service” in 1972. It was completely restored and made newly accessible by Fratelli Branca as an homage to the city of Milan, to which the tower was given the name Branca Tower.

When Branca decided to realize this project, the objective was to deliver to Milan also both a bar/restaurant as well as a space that could hold events. But that’s not all. Other objectives of the company, who had always been involved in the development of social culture, was also to awaken the pride of Milan. How? Creating a creative reference point, a new reality projected towards the future.

At the base of the Branca Tower, a metallic structure was realise, a semi-ciruclar space, inspired by the elements of the tower itself. All this in respect of the monumental architecture of the adjacent park (Palazzo dell’Arte, Castello, Arena e Arco della Pace). The materials used for the wall on theside of the park, in transparent crystal at high resistence, consent a suggestive vision of the power, and a pleasing view of the surround green of the park.

END_OF_DOCUMENT_TOKEN_TO_BE_REPLACED

The restyling project of #CIMINIERABRANCA, in Via Resegone in Milan, was done on the occasion of the 170th anniversary of the Fratelli Branca Distillerie. It was born as an idea and a wish to transform an architectonic element of great stature but so grey as the Branca old chimney was into a project of street art that would add value to the production facility and to the city of Milan, by representing in a modern way the secret recipe of Fernet-Branca and its 27 herbs, spices and roots.

END_OF_DOCUMENT_TOKEN_TO_BE_REPLACED

Branca, in collaboration with Eataly and the Museum services of the city of Torino, dedicated a Museum to the story og the Carpano brand and of vemouths.

The Carpano Museum, which you can find on the first floor of the old production facilities, offers visitors a journey that begins in Turin in 1786, when Antonio Benedetto Carpano invented the Kingd favourite ftink in the ancient shop of Piazza Castello, and arrives in Milan in current times to the distillerie Fratelli Branca.

The Branca Family has always demonstrated a great attention to culture and social context, to its transformations and its needs. Sensitive to new and avant-garde technologies, the Branca communication has indeed transformed itself also in events and life experiences, intervening to changes occurring in Italy and the world, for example participating to the grand expositions of the 900s.

The family has promoted various cultural initiatives always related to the territory and within the industry, for example the restructuring of the Tower or Parco Sempione, in Milan known today as Torre Branca, the Collezione Branca set up inside the current production facilities in Milan that opened to the public the 4th June 2009, the transformation of the production facility in St. Louis (France) into a permanent exposition space for modern art, and the Museo Carpano.

Because of this historic relationship between the company and culture, in all its nuances, today Fratelli Branca Distillerie continues to promote and create cultural initiative as a company or in collaboration with local, national and international association.

In 2008, in fact, Fratelli Branca Distillerie organizes in Argentina the competition “Arte Unico”, open to all argentine creatives the propsoe their own artistic intrepretations of the Branca World, from the historic logo to the bottles, from the historic campaigns to the symbols of communications.

Since the past July, the production facilities in Via Resegone 2 in Milan, within the enthralling spaces of the Museum, Fratelli Branca Distillreie has hosted two events, some of the most relevant in terms of culture for the city of Milan: the festival “Milanesiana” and “Letteralmente”.

During the Milanesiana, that hosted a range of meetings, concerts and events related to theatre, music, literature and cinema, Fratelli Branca hosted the presentation of the latest book by the famour singer/writer Francesco De Gregori “LA VANITÀ E LA BELLEZZA DELLA MUSICA, written in collaboration with Antonio Anioli.

The last 21st March, instead, within the spaces of the historic headquarters of the Branca offices in via Broletto 35, the company participated to the 4th edition of “Letteralmente Festival”, whose main concept this year was based on the theme “Information is Democracy”. The festival, founded in 2014 by the writer Moreno Gentili, is dedicated to the values of Civil Culture and proposes a rich agenda of meetings and encounters in the most important cultural Milanese sites. For this edition, Branca hosted the life concert By Marco Massa, Milanese singer/songwriter defined by the journalist Vincenzo Mollica “One of the best authors currently on the scene”